A LONDON FAVORITE SINCE 1972

In 1966, John Arp immigrated to Canada, a land of new beginnings for many Dutch immigrants after the war. Initially, John managed London’s “Country Fare” and “Iroquois” restaurants until 1972, when at 47 years of age he bought Kipps Lane Fish & Chips – at that time a major fixer-upper. After much hard work, a positive attitude, and his addictive and secret batter recipe, it wasn’t long before business was booming.

Kipps Lane Fish & Chips would soon be awarded the very prestigeous “Golden Plate” award by the London Free Press in 1982 for best fish and chips in London. A hard worker even in his 80’s, he never missed a day of work; and even though he did not advertise, his reputation as ‘The Codfather’ (dubbed by the London Free Press food columnists in 1982 and 2009), has become renowned throughout London. Kipps Lane Fish & Chips has many loyal customers who have made the halibut feast their weekly habit.

John Arp worked until his passing in mid-December 2010. The rich history, secret recipes and spirit live on through his daughter Jacqueline Arp and a friendly, outgoing staff. In addition to the famous halibut fish and chips and the most popular “Family Pack”, a large variety of other freshly prepared seafood items are also available. Although geared for take-out, limited space for eat-in is also available.

Listen to our CBC Interview 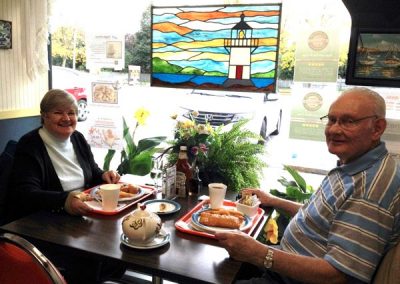 All of the Halibut we prepare and cook is premium quality, “hook and line wild-caught Halibut”. This guarantees high quality fish and is the most sustainable form of fishing.

All are skinned and boned entirely on premises for the ultimate in freshness and quality. 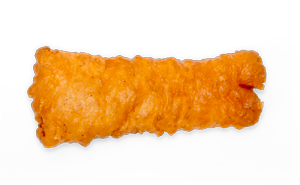 Our sustainable, premium halibut is line-caught fresh at sea in the Northern Pacific.

Fish prices keep climbing on halibut, but we work hard to maintain the same great value, portions and taste that originally made us famous.

Have you tried our haddock? It’s a moist and slightly sweet large-flake fish.

Some say it’s more flavourful than cod but not “fishy”. Our haddock is a premium product, line-caught in the waters of Northern Labrador.

Have you tried our cod? It’s fluffy and incredibly mild, with a light, tender flake and no “fishiness”.

Cod is the UK’s most popular fish. Our premium north Arctic grade ‘A’ cod is a terrific alternative for halibut lovers!

VIEW OUR MENU
Every time my husband and I go there, we feel like family. Sue R.
This family run business takes great care in getting to know their regulars and welcoming newcomers. It’s like walking into the bar in “Cheers” …everybody knows your name! J. Whelpton
Warm, friendly service and the best fish & chips you’ll ever have! Craig T.
When her father passed away, we were not sure what would happen but Jacquie picked up the torch. Jacquie & her staff are always happy and greet you like a friend, not just a customer. Timgard

Opened on February 14th, 1972 by Ruth and John Arp, it has been a mainstay of the neighbourhood. With the death of John and more recently Ruth, many wondered what would happen to this neighbourhood gem. However, their daughter, Jacqueline, who spent much of her childhood in the neighbourhood, and started helping out in the shop at 13 years of age, made it very clear that she was going to continue on the family tradition and keep the shop open. So Jacqueline, who has her Doctorate in Immunology, does research at Western University each day and then heads over in the late afternoon to help out at the shop. With the shop manager, Lorrie Emery and helpers Amanda Emery and Cristian Herrera, the tradition of homemade soups, salads, tartar sauce, along with fresh fish, chips and seafood continues.

After all these years, Jacqueline views many of the customers as friends, and she now sees the 4th generation of some families coming in on a regular basis. She knows how food has a sentimental, as well as nutritional value, and she didn’t want to see that lost. They have prepared meals for family reunions, celebrations and even as the dying wish of on elderly gentlemen who lived in the area and frequented the shop on a weekly basis. They have also contributed gift certificates to many community events and sponsored the North London Nationals hockey team.

As a community, thank you does not seem enough to say to Jacqueline, Lorrie and staff for their dedication to the neighbourhood, and for the high standards that they continue from Ruth and John. They have both our respect and admiration, and we will continue to support them as they have done for us for so many years.

DINING OUT WITH GAVIN DELL

When inside, you get a little taste of the history of the restaurant as you glance around and see newspaper articles and pictures on the wall. It is clear that this small shop has a big history. It was founded by John Arp in 1972 with a clear vision in mind. Through his hard work John took a store that was a “fixer upper” and turned it into Kipps Lane Fish and Chips, the best fish and chips shop in London.

John Arp ran the store up until December 2010, when sadly he passed away. This is when his daughter Jacqueline Arp took over the business, working at UWO in the day and Kipps Lane at night. Like her father, she too strives to bring excellent food to the people of London. With this busy schedule she has to rely on her amazing staff, including Lorrie Emery and Terry Gurnett, who help her prepare all the food from scratch.

So what about the food? Well, the fresh fish is dipped in a secret batter that creates a delicious crisp layer over the generous serving.
When you bite into it you get a little taste of what Fish and Chips in heaven would taste like. The fish is cooked to perfection and their homemade tartar sauce adds a spectacular touch. They also serve a Halibut and Bacon Chowder. I have had many types of chowder in my life, but this is by far the best I have eaten. The balance of flavors keeps you enjoying the meal to your very last bite. When you reach the bottom of the bowl you get a sense of disappointment, because you have just realized that you are out of amazing Chowder.

They also have many other options on their menu, one of them being their battered shrimp. I am a huge fan of shrimp and the layer of batter complements the flavor perfectly. Then there are the “Hali-bites”, which are pieces of halibut surrounded with batter shaped in balls. These are really nice for children as they can eat it with their fingers and enjoy a meal that doesn’t have to be cut up for them.

One of the best parts about Kipps Lane Fish and Chips is their prices. They have great serving sizes at very reasonable prices.

Gavin Dell is Food editor for the Christian Life in London Magazine @ www.clil.ca